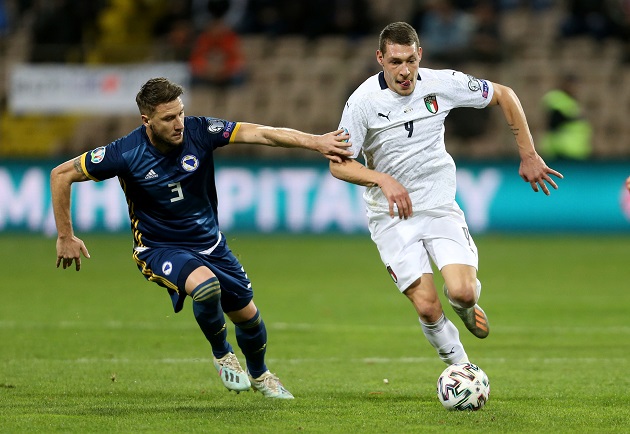 Four clubs are chasing a summer deal for Torino forward Andrea Belotti, according to reports.

The Italy international has been in red-hot form for the club since making the move in 2015, establishing himself as one of the best goalscorers in Serie A.

In 178 appearances since joining from Palermo, the forward has netted 85 goals and is now being linked with a move away from Torino.

Inter Milan are the favourites to sign him, with boss Antonio Conte keen to improve his forward options for next season.

Fellow Serie A sides AC Milan and Napoli, and Premier League outfit Everton are also keen on signing the 26-year-old.

Belotti’s exploits domestically have led to international recognition in the last few years with his maiden Italy call up coming in 2016.

He has scored nine goals in 27 caps for the Azzurri and is one of Roberto Mancini’s key figures up front.

Follow our live blog with @CaoimheSport for all the latest Everton news and transfers ⤵️https://t.co/EHjDpo967V

He scored four goals in Italy’s qualification campaign for Euro 2020 as they sealed a place in Group A.

The reports suggest that Torino president Urbano Cairo will try and convince the forward to remain at the club for the foreseeable future.

However, he has only just over two years left on his contract meaning his value will start decreasing.

That could open the door for any of the interested clubs to make an offer for the Bull’s forward.

It is understood Belotti would be open to a move away from the Stadio Olimpico Grande Torino in order to play Champions League football.

Belotti has not kicked a ball since February 29 with the Serie A season halted due to the coronavirus outbreak severely affecting Italy.