Flick reveals hard work behind the scenes at Bayern 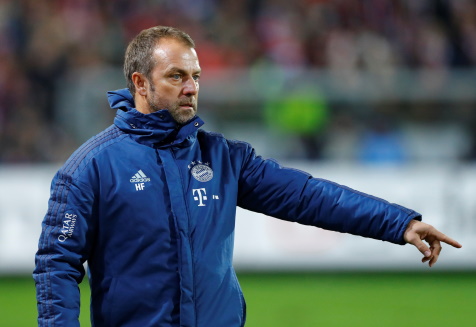 Bayern Munich boss Hansi Flick has assured supporters the players are working hard behind the scenes ahead of a hopeful return to Bundesliga action.

With the Bundesliga being suspended until further notice amid the coronavirus outbreak, Bayern players have been taking part in “cyber training” with head coach Flick and his coaching team.

Cyber training sessions are held via video calls with the process taking up to 90 minutes with first-team players over the last few days.

Bayern, who are in their familiar place at the top of the table, are taking all steps possible in the current climate to be ready for a return to Bundesliga action, with leagues across Europe eager to complete the season before starting the next.

Flick, who could be offered the head coach role on a permanent basis going into the next Bundesliga season, has been pleased with the work done via the video calls and feels the players are working hard to stay in good shape during this unprecedented time.

“I have already started to exchange information with small groups of players via video calls,” Flick said. “Our team of coaches has planned sessions that can last 90 minutes or 75 minutes, depending on the training focus. Yesterday the focus was on stability training.

“At the end, there was an intensive session on the spinning bike. Basically we will switch between basic endurance and high-intensity interval training, plus strength training. Everybody can see the coach on their tablet, so they can also do all the exercises we broadcast from Säbener Strasse.”