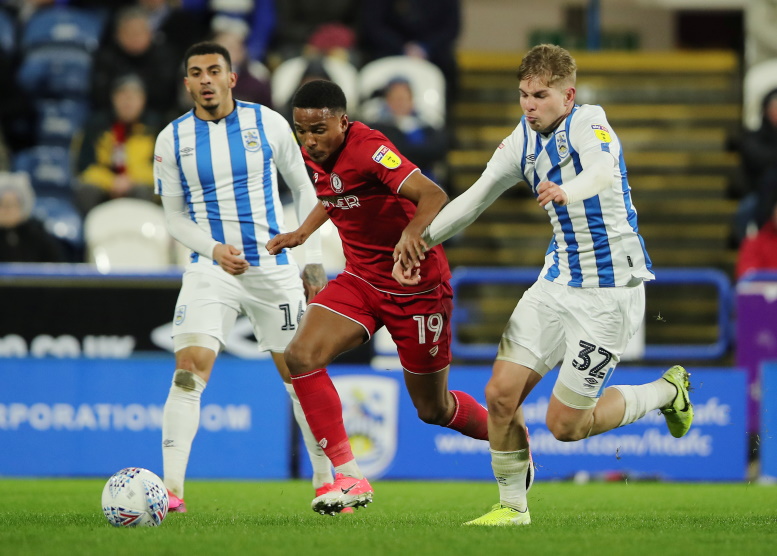 Huddersfield Town manager Danny Cowley has been quick to praise Emile Smith Rowe for another solid display after the victory over Bristol City on Tuesday night.

The Terriers boosted their hopes of avoiding relegation as they won 2-1 at the John Smith’s Stadium.

Chris Willock, on loan from Benfica, scored his first goal in senior football after latching onto Smith Rowe’s pass.

The latter then won a penalty, which was dispatched by Karlan Grant in the second half before Famara Diedhiou scored a consolation goal in the end as Bristol’s play-off hopes were dented.

Smith Rowe is on loan from Arsenal until the end of the season and Cowley believes he will succeed in the Premier League. He spent time on loan at RB Leipzig last season in the Bundesliga but he only made three appearances before returning to north London.

The 18-year-old made two league appearances for the Gunners but the boss believes he will continue to develop in West Yorkshire.

“He has that ability to find space; he could find space in a telephone box; he speeds the play up for you and draws and commits, and I think it would have been a brilliant performance if he had scored.

“I am always going to be demanding of him because, to me, he is a Premier League player, so I have to treat him like that and demand Premier League standards from him – in training and in games, day in and day out.”

Smith Rowe’s performance will not have gone unnoticed by Mikel Arteta but he is currently focused on Huddersfield’s fortunes. Cowley’s men are now five points clear of 22nd-placed Wigan Athletic, but the Latics play on Wednesday night against Reading.