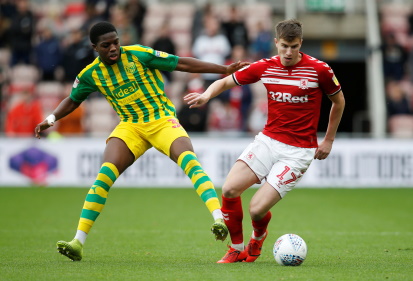 Ferguson is in the midst of his breakthrough campaign and he has already played 21 matches under Slaven Bilic.

The 19-year-old’s performances had not gone unnoticed and Crystal Palace agreed to pay £11million for his services.

Palace were also set to pay one million extra in add-ons, but the deal was then re-negotiated with Palace looking to loan him back to The Hawthorns.

#CPFC deal for Nathan Ferguson delayed over a fitness issue for #WBA right-back. Clubs to decide if deal goes through #CrystalPalace #WestBrom

Then at the 11th hour, Palace tried to change the deal after spotting an issue with Ferguson’s knee in the medical. The two clubs failed to agree to a transfer in the end and Dowling has confirmed the youngster will undergo surgery to rectify the issue.

However, he has no plans to stay in the Midlands on a long-term basis and Dowling says the club have done all they can to keep him in the Baggies shirt.

“The discussions we’ve had with his representatives since deadline day suggest that he’ll still leave us at the end of the season,” he told the Express and Star. “The potential of him staying here hasn’t even been talked about. We couldn’t have done any more,” he continued.

“Contract wise, we’ve made two or three offers to him. For us, the size of the contract we’ve offered and the opportunity we’ve given him on the pitch, we’ve done everything we can.”

Palace could return in the summer, but for now, West Brom will hope Ferguson can help get them over the line in the promotion race. Bilic’s side are top of the Championship table, and they have a one-point advantage over Leeds United.

They may be knocked off top spot for less than 24 hours though, with Leeds facing Nottingham Forest on Saturday night, while West Brom travel to Millwall on Sunday.