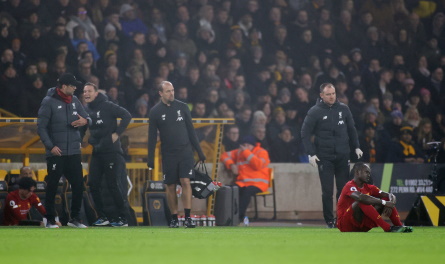 The double gameweek is now a thing of the past and it was a tough few days for those who triple-captained Sadio Mane.

Over 270,000 players decided to give the Senegal international the captain’s chip, but it all went wrong as he limped off against Wolves last week in what was set to be a huge week for Liverpool.

How many do you own? #FPL pic.twitter.com/BGvC5ZkMP3

He netted and grabbed an assist at the London Stadium and Mane will also sit out Saturday’s trip to Southampton. With that in mind, we pick out some alternative options for the Liverpool forward.

The Belgium international is the top-scoring midfielder this season and has 159 points to his name.

He continues to excel under Pep Guardiola and is someone who you can stick in your team and then never worry about.

City face Tottenham away from home this weekend and Jose Mourinho has been unable to solve his team’s defensive woes.

Spurs have conceded four in their last five matches, while City have scored 13 in five, and De Bruyne is expected to be at the heart of it all.

If you don’t have Salah, Mane or De Bruyne, well you may as well give up in this year’s FPL battle.

For those who went for alternative options last week, get him in your team ASAP. The Egypt international has registered the third-most shots inside the box in the last three games.

He has only scored 10 points less than De Bruyne this season and looks in an excellent position to finish the season on a high.

The Villa star has been superb in recent weeks and should have a spring in his step after helping the Villans reach the EFL Cup final.

At home, Dean Smith’s side have been humbled but Grealish has been in fine form on the road. He scored 13 points in GWK21 and 10 in GWK23 and is available for a very fair price.

The speed merchant was in inspired form during the 2-1 defeat to Liverpool and deserved more. He grabbed an assist at Molineux and looked a level above some of his team-mates.

He travels to Old Trafford this weekend, with Manchester United still not the finished article at the back, and Traore’s pace could cause carnage in Saturday’s 5.30pm kick-off.