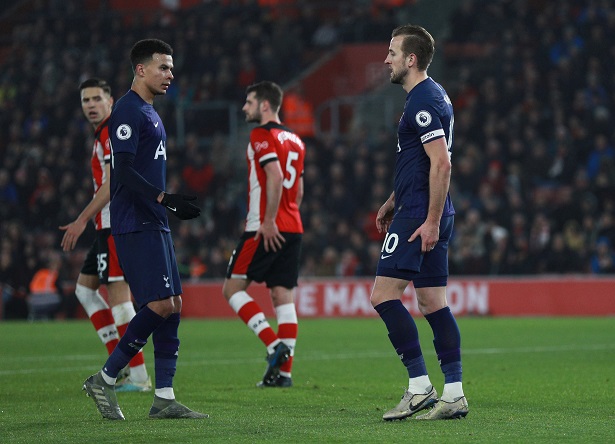 England go into Euro 2020 with the real possibility that Harry Kane could be absent – so how to they cope without their talisman?

The Tottenham forward, who seems luckless with injuries at the moment, will be out until at least April with a hamstring injury sustained in their New Year’s Day loss to Southampton.

Kane ruptured a tendon in his leg muscle and the initial diagnosis ruled him out until April.

However, boss Jose Mourinho ramped up the negativity surrounding Kane and believes there might be a chance he misses Euro 2020.

On paper, that would be a disaster for England – he is easily their most reliable goalscorer – and while the critics may suggest that there is a lack of variety to his goals (glorified penalty taker etc), he is usually there to stick chances away.

Not only that, but Kane provides a great focal point up front and his strength and ability to hold the ball up to allow the likes of Raheem Sterling and Marcus Rashford to run in behind and score goals themselves.

Even if Kane does make it back fit for the Euros, it is unlikely he’ll be in truly great shape to help England win their first major international trophy for 54 years.

The time has come then to experiment with different options in case the 26-year-old fails to make it.

Southgate might have to tweak his preferred 4-3-3 formation and go back to the 3-5-2 that served him so well at the 2018 World Cup.

The boss has been discussing what to expect from the #ThreeLions' preparations for #EURO2020:https://t.co/jR9oM5s8yG

Marcus Rashford has done brilliantly for Manchester United this season, his goals tally of 19 in 31 appearances across all competitions for the Red Devils is excellent considering he sometimes draws criticism for not scoring enough.

However, he does not have the physical presence of Kane and is better playing with a partner.

Rashford and Sterling could work as a pairing up front, with the likes of Jadon Sancho, Callum Hudson-Odoi, and Mason Mount all playing in and around the box.

It would mean the re-introduction of wing-backs with two tailor-made players for each side in Trent Alexander-Arnold and Ben Chilwell.

However, Southgate has persisted with the 4-3-3 and would probably prefer to stick with it rather than bin essentially two years’ worth of work.

Tammy Abraham will be eyeing up the England number nine shirt in Kane’s absence and has proven to be an excellent lone forward for Chelsea this season, scoring 16 in 31 across all competitions.

A real surprise return to form this season has come in the form of Southampton forward Danny Ings.

The one-time Three Lions striker has been ravaged by injuries over the past four years but is now the most in-form striker in England after scoring 16 goals this season, grabbing 10 in his last 11.

Ings’ ability to sore and also drop deep and knit play tighter make him an interesting prospect for Southgate.

Then, there is the elephant in the room in the form of Jamie Vardy.

Yes, he is retired from international football, and yes, Southgate would probably have to grovel to get him back but Vardy’s pace and experience could seriously help England out in the summer.

Having a half-fit Kane at best might sound like a bad prospect for England, but there are plenty of options at Southgate’s disposal – it all comes down to him having the correct contingency plan.