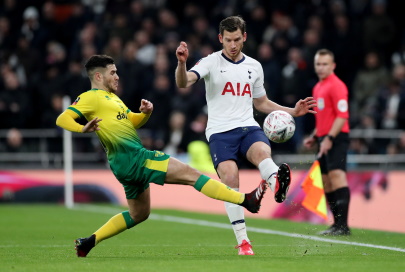 Tottenham defender Jan Vertonghen says he is 'very happy' at the club despite Wednesday's FA Cup defeat to Norwich City.

The Belgium international has looked a frustrated figure in recent weeks ever since he was substituted during the 3-2 win over Southampton in the FA Cup on February 5.

Vertonghen had started the 1-1 draw, but in the replay, he was hooked off after just nine minutes of the second half. Boss Jose Mourinho decided to make a change as his team were being overrun.

He was back in a Spurs shirt on Wednesday and scored the opening goal of the game after meeting Giovani Lo Celso’s free-kick at the far post. Josip Drmic equalised for Norwich before the Canaries advanced on penalties in north London.

HALF-TIME: @JanVertonghen's header hands us a narrow lead at the break.

Vertonghen was in inspired form though, and he caused problems all night after slotting in at left-back. Wednesday’s clash was his third since the Southampton snub, and he says was just frustrated on that occasion, and he has thanked for Mourinho for standing by him.

“It was more of a disappointment with my performance that day,” he told Football London. “But I feel a lot of confidence from the manager, and I’m very thankful for that.

The former Ajax defender is out of contract in the summer, and the club’s board have so far failed to agree fresh terms with the veteran.

Spurs fans are worried he could soon follow Christian Eriksen out of the door, with the Denmark international calling time on his spell in north London to join Serie A giants Inter Milan during the January transfer window.