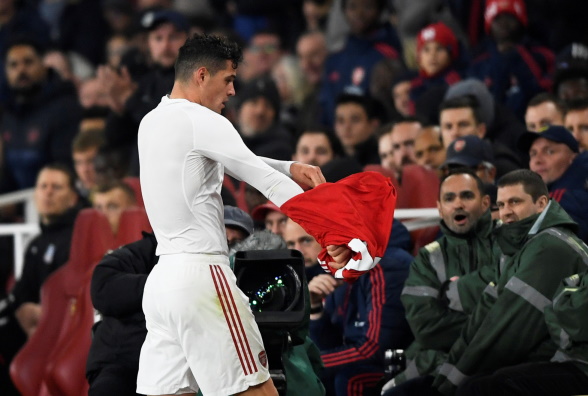 Granit Xhaka’s career at Arsenal appeared to be over just a few months ago but he’s turned the situation around under the guidance of Mikel Arteta.

The Swiss midfielder’s reaction to jeers from the crowd as he was being substituted in a 2-2 draw with Crystal Palace in October saw him stripped of the Arsenal captaincy, just one month after he was handed it.

Xhaka did make a return at the end of November in a Europa league trip to Eintracht Frankfurt but was still expected to be sold in the January transfer window.

Rumoured moves to Newcastle and the Bundesliga failed to materialise and Xhaka stayed put, with the 27-year-old now a regular again under Arteta.

Xhaka isn’t the first man to resurrect his career, be it at a specific club, international level or simply at the top level in general.

It has been a quick turnaround for the former Borussia Monchengladbach man and some players have waited years for their shots at redemption.

David Beckham was England captain under Sven-Goran Eriksson but opted to give up the armband after the Three Lions’ exit from the 2006 World Cup.

Steve McClaren took charge after Eriksson’s exit and made a statement by dropping Beckham completely from his squad, citing a desire to go in a “different direction”.

The then Real Madrid midfielder was on 94 caps at the time and it looked as if he would just miss out on joining the 100 club.

However, he was handed a recall by McClaren just under a year later, with Beckham eventually becoming the fifth English player to reach a century of appearances for his country under Fabio Capello.

Marco Reus began his career with Borussia Dortmund at youth level but left as a youngster and made his breakthrough with Borussia Monchengladbach.

The forward did earn a move to BVB in 2012 and quickly established himself as a star man, with 19 goals in 49 appearances in his first season.

However, injuries started to take their toll on the Germany international and he managed just 39 outings in total in the 2016-17 and 2017-18 seasons, spending large chunks of those two campaigns watching from the sidelines.

Reus has managed to stay fit more recently and weighed in with 21 goals in 36 games last term although he has just been ruled out for a month with a muscle injury.

Axel Witsel was a highly-rated prodigy when he broke through the ranks at Standard Liege in his homeland of Belgium.

The midfielder was heavily affected by an incident in a clash with Anderlecht in 2009 where he broke Marcin Wasilewski’s leg in two places.

In an interview with the Guardian, Witsel’s father explained how he felt that moment had a huge impact on his son.

He said: “The incident has changed Axel. There is an Axel before the tackle and an Axel after. His character became more closed. You could see in his face that he was touched by the storm around him. That lasted a few days and then he made the switch. He has created a thick skin and became mentally strong and balanced. No one can drive him crazy anymore.”

Witsel had been expected to go on to enjoy a career at the very top level of European football. However, after leaving Standard he had largely forgettable spells at Benfica and Zenit St Petersburg before heading to China.

The midfielder is now back in elite level competition with Dortmund and it is a case of better late than never as his talent is finally on display in Germany’s Bundesliga.