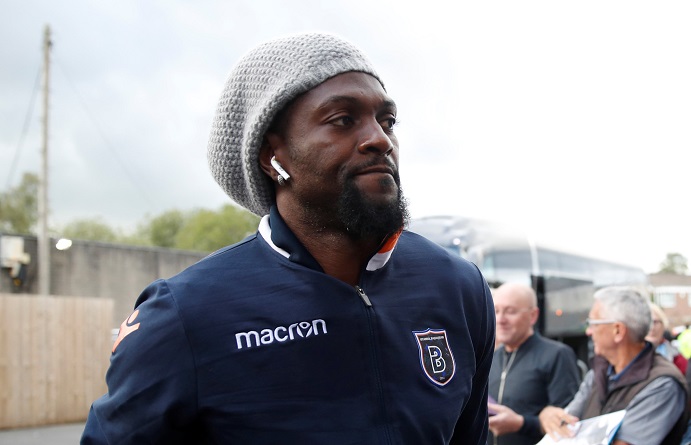 The former Arsenal and Manchester City forward will play in Paraguay for Olimpia after agreeing a move to South America.

The 35-year-old is certainly well-travelled and not just within the confines of the Premier League.

He might have represented four clubs in England but his career has taken a number of other surprising turns.

After leaving Crystal Palace, Adebayor had six months in the wilderness before being picked up by Turkish outfit Istanbul Basaksehir and spent three relatively successful years there before joining Kayserispor at the beginning of the season.

Now, he is set to make the odd and unlikely move from Turkey to Paraguay and link up with former Manchester City team-mate Roque Santa Cruz.

While the Togolese forward might have clocked up the air miles, his career has been relatively settled compared to some. Here are five players who spent their careers living out of suitcases.

29-year-old Jenkins was lauded as a promising talent in his early days at Vicarage Road.

As a teenager, he was a regular in the Watford side which achieved mid-table finishes in 2009 and 2010 and earned caps for the England under-20 side.

Injuries, however, meant he was farmed out on loan to the lower leagues and after a permanent deal was agreed at Crawley, he was let go in 2016.

Jenkins then had to take a gamble and he moved to Romania to play for ACS Poli Timisoara.

One goal in nine games followed before he dusted his passport off once again, this time to join Bulgarian FC Pirin Blagoevgrad.

A spell at Viking in Norway followed that before he settled back into the (relative) home comforts of the Scottish Premiership with Hamilton.

He is now a coach at non-league Oxford City.

A lot was expected of Ricketts in his younger days, so it is a surprise his career was as fragmented as it was.

The midfielder was let go by Tottenham after 30 Premier League appearances and joined Wolves.

After milling around in the Championship, Ricketts made his first overseas move after being snapped up by MLS outfit Toronto in 2008.

Subsequent transfers saw him play in Hungary, Moldova, Ireland, India, and Thailand among others. Not forgetting his random one-game stint in League One with Exeter in 2012.

Ricketts has dabbled in podcasts since his retirement.

Barring a stint in the fourth tier of Australian football in 2010 with Sunshine George Cross (???), Benjamin never played outside Britain.

His early years showed promise, and he earned a move to Leicester from Cambridge in 2000.

Perhaps his best accomplishment afterwards was helping Hereford earn promotion to League One after scoring 10 goals in 34 games.

From there, he became a football equivalent of an odd-job man and after retiring, he went into business selling goalkeeper gloves. An interesting choice for a former striker.

Jefferson Louis – too many to count

Louis is probably the football equivalent of a band who writes a really good Christmas song – his signing on fees have probably set him up for life, even if all his moves were in the lower leagues.

It’s difficult to know where to start with the London-born forward, who won a solitary international cap for Dominica in 2008.

His stint at Wrexham for the duration of the 2008-09 season yielded 15 goals in 42 games and finally, it looked like he could settle somewhere.

That didn’t stop them terminating his contract and Louis spent the next decade hopping from club to club in the hope he would settle.

Scoring 22 goals in 25 appearances in the 2013-14 season for Hendon showcased genuine ability in front of goal and now, as a 40-year-old is still playing in the National League South for St Albans.

The German goalkeeper is the ultimate nomad. A pub quiz answer in years to come. Boss level or unlockable character on any video game. Literally Antarctica is the only continent on Earth he hasn’t played on. And, if they do start playing football there any time soon, expect him to unhang his gloves.

Like many nomads, Pfannestiel’s early years suggested a more conventional and successful route – he was a regular Germany youth international.

However, a penchant for swapping clubs meant he played in South Africa, Singapore, New Zealand, Canada, a host of European countries, and Bradford Park Avenue.

South America was the elusive missing piece of the jigsaw until he got the call from Brazilian side Hermann Alchinger in 2008 to become the only player in history to play in all six continents.

He now works as a television pundit and commentator in his homeland, having completed the full circle.