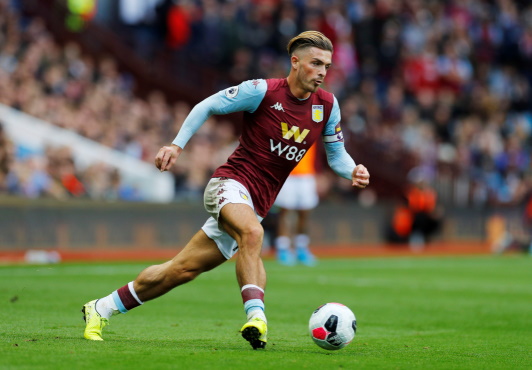 Aston Villa manager Dean Smith has heaped praise on Jack Grealish after a fine season so far for the midfielder in the Premier League.

Grealish is Villa’s top-scorer this season with nine goals across all competitions, while he has also weighed in with seven assists.

The 24-year-old’s performances have seen him linked with a summer move to Manchester United, while Tottenham, who Villa host on Sunday, have previously been interested in the playmaker.

Grealish has been tipped to earn a place in Gareth Southgate’s England squad for Euro 2020 if he can maintain his form over the course of the season, and Smith has lavished praise on his star man ahead of Spurs’ visit.

Smith feels Grealish can be compared to Tottenham’s Dele Alli, who at 23-years-old has already won 37 caps for the Three Lions.

“We believe Jack Grealish has that star quality as well [as Alli],” the Villa boss told The Mirror.

“Jack’s ability is there for all to see. It is his first full season in the Premier League this year and he has hit the ground running too.

“He has carried the responsibility of being captain and an Aston Villa fan forward.”

Grealish’s future is likely to be a hot topic throughout the remainder of the campaign as both United and Spurs continue to be linked, while there could be further interest as the summer transfer window approaches.

Villa will be keen to keep hold of their star man, and their hopes of keeping Grealish are likely to rest on whether or not they can avoid an immediate return to the Championship.

The Villa Park club sit in 17th place in the table ahead of the visit of Spurs, one point clear of the bottom three.