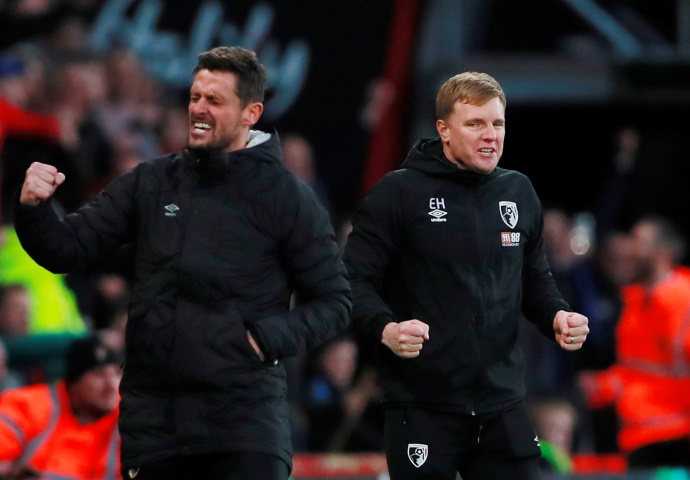 Bournemouth boss Eddie Howe says there is a long way to go in the relegation fight, but believes the win over Aston Villa was a ‘big moment’ for his side.

Howe’s men picked up a huge three points against fellow relegation rivals Villa, thanks to a 2-1 win, and had to do it with 10 men.

The Cherries moved out of the Premier League’s bottom three thanks to first-half goals from Philip Billing and Nathan Ake, though they were hanging on in the end after Jefferson Lerma’s red card.

Lerma walked early in the second half for two bookings and Villa made a game of it as Mbwana Samatta scored on his Premier League debut – becoming the first Tanzanian to do so in this division.

But Howe’s men leapfrogged their visitors in the table after seeing it out, claiming just their second win since mid-December.

Howe refused to get too carried away with the win, pointing out there will be plenty of twists and turns before the end of the season, but there is no doubting the importance of the three points.

“We don’t know whether it will define our season but it feels like a big moment,” Howe said. “We have shown we are still alive and kicking and we have points to prove.

“We have a long, long way to go before we can say we have done anything. There are some tough games to come, nothing is decided today. It’s just we are in there fighting and showing we want to be in the Premier League.”

Bournemouth were too hot for Villa to handle in the first half and after Billing swept home Dan Gosling’s knock down in the 37th minute, Ake’s fired home from close range on the stroke of half-time.

Lerma hit the crossbar early in the second half but in the 51st minute he was sent off for a second yellow card, both on Jack Grealish.

Samatta gave Villa a lifeline with a goal on his league debut with 20 minutes remaining but Villa could not force a leveller.