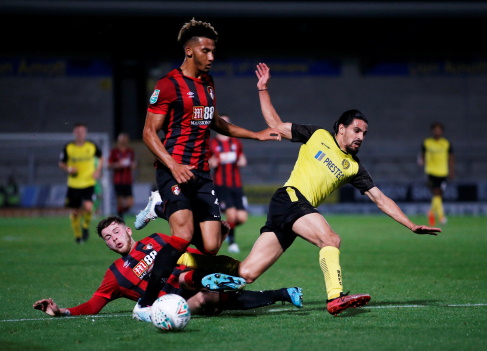 Bournemouth manager Eddie Howe has backed right-back Lloyd Kelly to "go right to the top" even though he has not played for the club.

The 21-year-old made his name at former club Bristol City, where he joined their academy at the age of 12.

Kelly went on to make 48 appearances for the Robins in two seasons before he was then snapped up by Bournemouth in May 2019. The Cherries reportedly agreed a £13million fee with the Championship club, but it has all gone wrong since he moved to the south coast.

He picked up an ankle injury during pre-season and then suffered a thigh injury in November. His only appearance under Howe came in the EFL Cup in September against Burton Albion.

Kelly has been an unused substitute on five occasions, and Howe is making him wait for his Premier League bow. The former Burnley coach is refusing to take any risks with his team in the bottom three, but he has backed the youngster to have a fabulous career.

Howe told the Daily Echo: “I think he’s handled himself really well. He’s a very mature character for his age.

“He is someone who is quite a deep thinker about the game, very serious about his career. He is very driven to do well but in a really good way. I think he can make a difference as well. I think he’s got real potential to go right to the top.

“It has been a difficult start but sometimes in adversity, initially, a lot of strength can grow from that. I don’t think it will knock him long-term, but certainly it’s frustrating in the short-term.”

Kelly is unlikely to feature in this weekend’s game against Liverpool at Anfield on Saturday. Still, he may feature on March 14 when Howe’s troops welcome Crystal Palace to the Vitality Stadium.