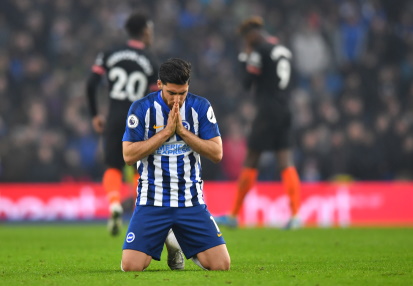 Brighton & Hove Albion captain Lewis Dunk says the squad would not go far wrong if they all followed Alireza Jahanbakhsh's attitude and commitment this season.

The Seagulls have been dragged into the relegation scrap in the last few weeks, with Graham Potter’s men now 15th in the Premier League table.

Brighton are just two points above the bottom three, with Bournemouth and Watford both improving their fortunes in recent weeks.

Potter’s side have only won one of their last five matches in the top flight, and they were humbled in their last match as they lost 3-1 to Bournemouth.

Brighton went into the game as the favourites, and they now face back-to-back games against teams around them in the table when they take on West Ham United and Watford in the next two weeks.

Dunk believes Jahanbakhsh deserves special credit for his recent form, with the Iran international impressing after a slow start to life in England following his move in summer 2018.

He scored on his first league start of the season against Bournemouth and now has two to his name in just five appearances, with his acrobatic overhead effort against Chelsea particularly standing out.

Jahanbakhsh says he wants to stay put and help the team out of trouble despite media reports linking him with a move away from the AMEX Stadium. Dunk says his commitment has rubbed off on the squad and he believes they should use him as inspiration in their fight to avoid the drop.

He told The Argus: “I saw how hard it was for him, and also others. That’s what we need throughout the whole squad. You need that same attitude.

“It’s no good just resting and thinking ‘I haven’t got a chance here I am going to give up’.

Dunk’s centre-back partner, Shane Duffy, is set to miss the trip to the London Stadium this weekend.

The Republic of Ireland international has had a minor operation, but he is not thought to be a long-term absentee.