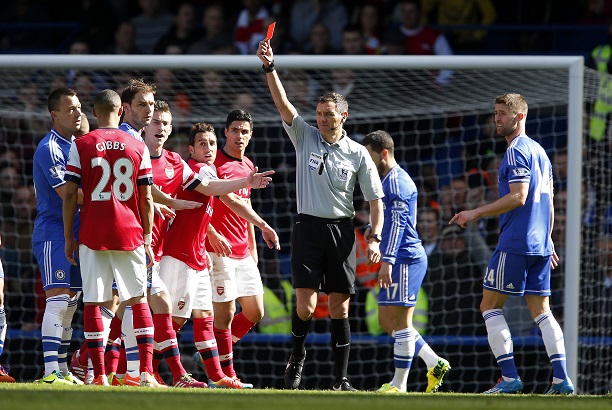 Six years ago, Arsene Wenger’s 1,000th game in charge of Arsenal was a day to forget as Chelsea crushed them 6-0 at Stamford Bridge.

The build-up was dominated by the increasingly acrimonious relationship between Wenger and old nemesis Jose Mourinho.

Just five weeks prior to the game, Mourinho branded Wenger a “specialist in failure” in one of his pre-match press conferences, citing the Gunners’ failure to win a major trophy for nine years.

It was a cheap jibe by Mourinho but also symptomatic of how far Arsenal had fallen away from being contenders, despite consistently qualifying for the Champions League.

However, there could be no slip-ups with Liverpool having a game in hand and, more crucially, City having three.

Arsenal began the day third in the table and still with a realistic chance of ending their trophy drought but the result will have sapped any confidence away from their squad.

Ten minutes after, Chelsea won a penalty after Alex Oxlade-Chamberlain handballed on the line.

Farcical scenes followed as Andre Marriner brandished a red card to team mate Kieran Gibbs in a case of mistaken identity, and, despite the bizarre images of Oxlade-Chamberlain insisting he should be sent off, the referee stuck with his original decision.

Eden Hazard converted the spot-kick and, by then, it was game over – Chelsea were able to cruise their way to the final whistle.

The scoring for the first half wasn’t over though as Fernando Torres raced into the right-hand channel before teeing up Oscar for a tap-in to make it 4-0.

Chelsea were in third gear for most of the second half but they made it five on 66 minutes with Oscar grabbing his second of the game.

Pouncing on a loose pass, the Brazilian opened his body up from 25 yards out and struck home past a despairing Wojciech Szczesny, for whom it should have been a routine save.

The scoring ended mercifully for Arsenal in the 71st minute as Nemanja Matic’s lifted through ball found an isolated Mo Salah, who had sprung the offside trap expertly.

The Egyptian then remained composed enough to score what would prove to be the first of many Premier League goals, even if his spell at Chelsea was underwhelming.

Full-time could not come soon enough for Arsenal who’s chances of the title imploded on that day.

Big wins for Liverpool and Manchester City meant it remained as-you-were at the top of the table.

Ultimately, both Chelsea and Liverpool slipped up and allowed City to nick the title from their grasp, despite only leading the table for less than two weeks of the season.

Arsenal meanwhile ended the season fourth, seven points off top spot, though they did end their long trophy drought after a stirring FA Cup final comeback against Hull City.