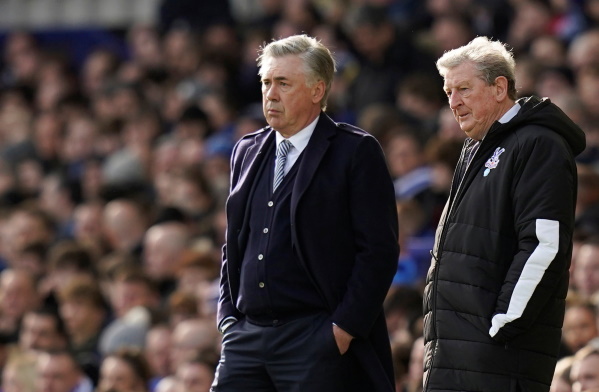 Roy Hodgson says his Crystal Palace side did not deserve to lose at Everton and the result is one that “badly hurts”.

Bernard had given the Toffees the lead on 18 minutes but Palace dug in well and when Christian Benteke equalised in the 51st minute it was the least they deserved.

However late goals by Richarlison and Dominic Calvert-Lewin wrapped up a 3-1 win for the home side.

Even Everton boss Carlo Ancelotti admitted after the game that his side had played poorly for the first hour and Palace were the better side. But that counts for nothing after Palace left empty handed and still stuck in a poor run of form.

While Everton continue on their upward curve Palace are heading in the other direction with no wins and just four points in their last seven matches.

They also have the worst goalscoring record in the Premier League, with just 23 in 26 matches.

Summing up the performance after the game, Hodgson felt they needed to capitalise on their one good spell just after half-time when Benteke scored as Toffees goalkeeper Jordan Pickford let the ball slip through his hands and into the back of the net.

“I thought we played well for large parts of the game. Not right at the start but neither side were they playing well,” Hodgson said. “For 20-25 minutes there was not much going on but after that I thought we started to play much better.

“We started the second half extremely well and when we got the equaliser I thought it was a fair reflection. It is a defeat that hurts us badly.”

Palace were once being talked about as possible Europa League contenders but not sit in 14th spot in the table, just six points above the relegation places, having played a game more.

The Eagles return to action after their winter break when they take on Newcastle at Selhurst Park on Saturday, February 22.