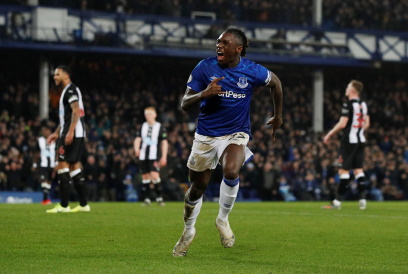 Everton striker Moise Kean says he can now kick on and show his best form after netting his first goal for the club.

Kean has been forced to bide his time at Goodison Park, with 13 of his 18 appearances coming off the bench.

He was initially signed by former coach Marco Silva, but he was still in the headlines during Duncan Ferguson’s caretaker role.

Ferguson sent Kean onto the park in the 1-1 draw against Manchester United, only to sub him 19 minutes later.

Current coach Carlo Ancelotti has since used him more, and the former Juventus forward rewarded him with the opening goal in Tuesday’s 2-2 draw against Newcastle United.

Dominic Calvert-Lewin then scored his 10th goal in 17 starts this season for the Toffees before Florian Lejuene scored twice in stoppage time to seal a draw for the Magpies.

Kean produced his best display of the season in front of the Everton fans, and the Italy international has thanked the fans and urged them to stand by him as he tries to prove his worth.

He told Everton TV: “It feels good, it is a big motivation to do more work and help the team. I hope it is the first of many.

“I showed to the coach in training I am ready, and if he chooses to put me on the pitch, I do my best. I am very happy. It is good motivation to start to do very well, to play very well for the team.

“Me and Dom play very well together. It is good for me and for the team that we play two strikers, but we need to keep going to achieve more good results.”

Everton have still lost just one league game out of six under Ancelotti, and their current unbeaten run stands at three matches.