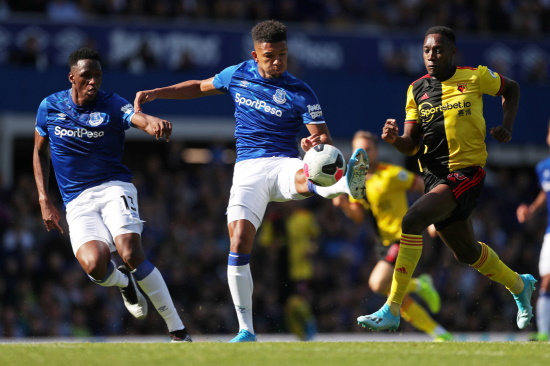 Defender Mason Holgate remains focused on making Everton better as his improving form has started to get noticed by some of the bigger clubs around.

Former England Under-21 international Holgate has established himself as Everton’s first-choice centre-back this season, starting 18 of the last 19 Premier League matches, and his impressive performances have brought about talk of a potential call-up to the Three Lions’ senior side.

Gareth Southgate was in attendance at Goodison Park to watch the controversial 1-1 draw at home to Manchester United on Sunday, where Holgate partnered Michael Keane as Carlo Ancelotti left £27million signing Yerry Mina on the bench.

That display has further increased the 23-year-old’s chances of a senior call-up ahead of England’s March friendlies while talk of a summer switch to Manchester City, who were linked with a move last week, also appears to have intensified.

Ancelotti has stressed there is “zero possibility” of the defender leaving although the chance to play for the Citizens, who won the League Cup for the third straight year on Sunday after beating Aston Villa 2-1 in the final, may be too hard to turn down.

However, Holgate, who would follow in the footsteps of former Everton team-mate John Stones in signing for City, is ignoring the interest now being shown in him and is concentrating on getting the Toffees up the table for the remainder of the campaign.

“It’s not really what I think about my personal form, it is more about the team and where we are going as a team,” he said. “I am glad we have started getting results. Last week (the 3-2 defeat at Arsenal) we were upset with our defensive play and the gaffer came out and said that.

“I am more than happy with how things went (against United). We looked quite solid as apart from the goal I think we defended quite well.”

Everton return to action on Sunday when they make the trip to Stamford Bridge to take on Chelsea, who slipped up in their top-four pursuit when drawing 2-2 with Bournemouth on Saturday.