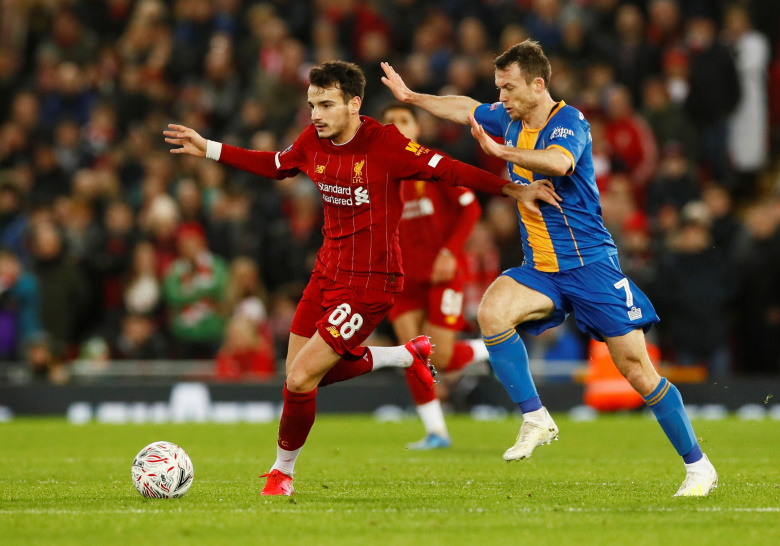 Pedro Chirivella believes he is now close to the level required to be a first-team regular at Liverpool after starring in the FA Cup win over Shrewsbury Town.

The midfielder was one of the stand-out performers for a young Reds side that overcame the League One outfit 1-0 in the fourth-round replay at Anfield on Tuesday night.

It was an occasion to remember for a whole host of academy players, who were given the chance to shine as boss Jurgen Klopp decided his first-team squad should be granted their mid-season break.

Chirivella, along with the likes of Neco Willams, Curtis Jones, Harvey Elliott and Ki-Jana Hoever, impressed as Liverpool’s youngest-ever side progressed to set up a fifth-round tie at Chelsea.

It’s thought Klopp will give at least some of those who started against the Shrews another chance at Stamford Bridge, even though Mohamed Salah, Roberto Firmino, Jordan Henderson and co will all be available again early next month.

Chirivella, who was the oldest in the side at 22 and now has 11 senior appearances under his belt, feels he is good enough to be in contention for Klopp’s side after he also caught the eye against Aston Villa in the Carabao Cup in December and also the previous round of the FA Cup in the 1-0 win over Everton.

“Mentally I feel ready. I train every day with the first team and I feel I am getting closer to the level,” the Spaniard said.

“I came (to the club) very early, when I was only 17, and maybe I was not ready yet. Now I feel I am getting there. I am getting very good feedback from the players. My mentality has changed and hopefully I can carry on.”

Chirivella faces a tough task trying to get into the Reds’ main squad on a regular basis, however, as Henderson, Georginio Wijnaldum, Fabinho, Naby Keita, James Milner and Adam Lallana are all ahead of him in the pecking order.