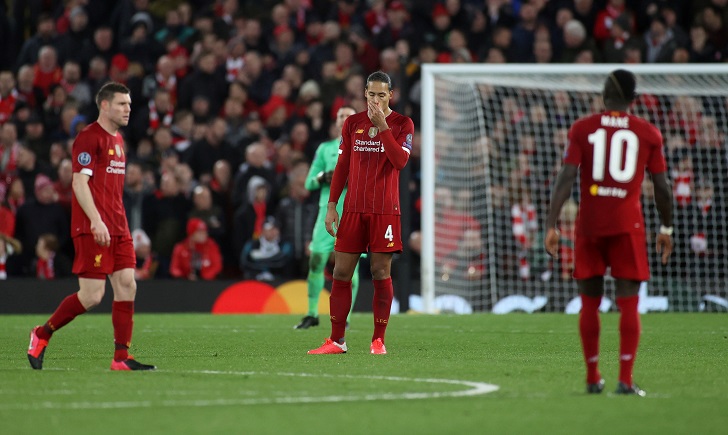 Liverpool defender Virgil van Dijk says he and his team mates will not let their Champions League exit influence the rest of their season.

The Reds will not defend their crown after going out to Atletico Madrid in extra time at Anfield on Wednesday night.

Heading into the second leg of the tie 1-0 down, Georginio Wijnaldum scored the only goal in 90 minutes meaning the tie went to extra time.

Roberto Firmino put Liverpool ahead for the first time in the round-of-16 game before Athletic grabbed an all-important away goal.

Marcos Llorente pounced on a dreadful clearance from second-choice goalkeeper Adrian to put Atletico in front before scoring again to almost put the tie beyond Liverpool.

With the Reds piling everyone forward in the dying embers of the contest, Atletico were able to counter-attack as Alvaro Morata scored to dump Liverpool out.

It means last season’s champions now only have the Premier League to concentrate on before the season comes to an end in May.

Our #UCL run comes to an end.

They are extremely close to their first league title for 30 years and only require two more wins from their remaining nine games.

In the last few weeks, Liverpool have not looked quite as invincible as they did at the turn of the New Year, with their first defeat in the league coming against Watford last month.

Liverpool have also been knocked out of the FA Cup after going down 2-0 to Chelsea last week.

Despite now only having the Premier League to aim for, Van Dijk insists they will not let their Champions League exit have negative consequences on the squad.

“The only thing is we are out of the Champions League. But we are back in on Friday and then everybody has to be ready for another intense game and we will be,” said the Dutchman.

“Let’s go out there and enjoy it and don’t forget why we are 25 points clear at the top.”

Liverpool’s next game is on Monday night as they make the short trip across Stanley Park to face local rivals Everton.