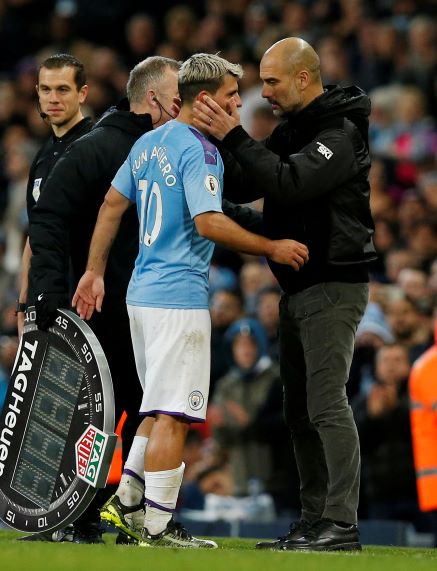 Manchester City boss Pep Guardiola has admitted the club have a mighty job on their hands to find a long-term replacement for Sergio Aguero at the Etihad.

The 32-year-old, who signed for City from Atletico Madrid back in 2011, has gone on to become the club’s record goalscorer with 252.

Reports have suggested Aguero could be approaching the end of his time with the Citizens, with suggestions the player could leave the Etihad on a free in the summer.

Guardiola is already set to lose veteran midfielder David Silva at the end of the season when his contract comes to an end.

City already have Gabriel Jesus learning from the Argentine at the club but the reigning Premier League champions are scouring the globe looking for a long-term placement for Aguero.

Replacing someone of Aguero’s finishing ability is something Guardiola knows will be a massive test for the recruitment team at the Etihad.

“It’s a completely different approach with strikers compared to David (Silva) and the others,” admitted Guardiola. “Strikers is numbers. Strikers is a smell of a goal. It is not easy to find it and I think all the big clubs need this kind of guy. When Sergio is fit and happy, he can do anything.

“We have a department here to look at new talented players in different countries. People talk about players to me and show highlights but I don’t have time to look in depth at the specific skills.”

City have been linked with a host of forwards across the globe, with Paris Saint-Germain and France star Kylian Mbappe often being connected with the Premier League’s big spenders.

The Citizens would face stern competition if they were to go in for the 21-year-old in the future, especially with La Liga giants Real Madrid thought to be eager to secure the youngster’s services.