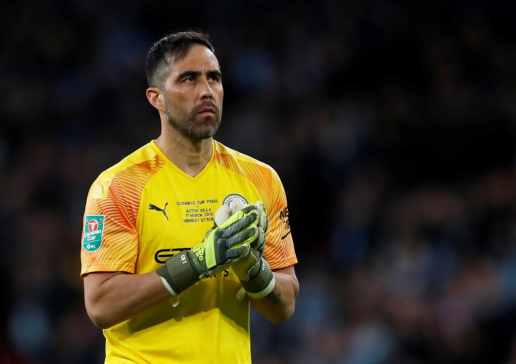 Claudio Bravo is poised to accept a two-year offer to join New York City FC despite his heroics in Sunday's Carabao Cup final win over Aston Villa at Wembley.

The Manchester City goalkeeper lost his number one status to Ederson just a year after arriving from Barcelona in 2016 owing to a series of high-profile errors during his debut season in the Premier League.

However, Bravo, 36, made a crucial save in the dying minutes to push Villa defender Bjorn Engels’ header on to the post, ensuring Pep Guardiola’s team took the League Cup trophy back to the Etihad for a third year in succession.

How did you react to this late drama at Wembley? 😱⁣
⁣
👏 @C1audioBravo
🔵 #ManCity pic.twitter.com/FbjbZW82or

The Chilean is out of contract this summer and has been considering offers from Major League Soccer, with City’s sister club in the Big Apple willing to pay him £55,000-per-week.

It is understood Bravo has also discussed a proposal from Besiktas in Turkey with his young family, but the former Nou Camp favourite is all set to agree on a switch to the United States in the coming weeks.

The Citizens currently have Kosovo international Aro Muric on loan at Championship side Nottingham Forest although the academy prospect has not pulled up any trees at the City Ground.

Another possible Bravo replacement could be American shot-stopper Zach Steffen, signed last summer from Columbus Crew and earning rave notices in Germany on loan at Dusseldorf.

Bravo earns £120,000-per-week at the Etihad, so Guardiola also has wiggle room to bring in a more experienced goalkeeper if he decides that is the way to go again.

City are back in action tonight against Sheffield Wednesday at Hillsborough in the FA Cup fifth round, and Guardiola is expected to select another strong line-up.

Young midfielder Phil Foden picked up the man of the match award at Wembley and could start for the second successive game, with Guardiola confirming already that Bravo will again be his man between the posts.