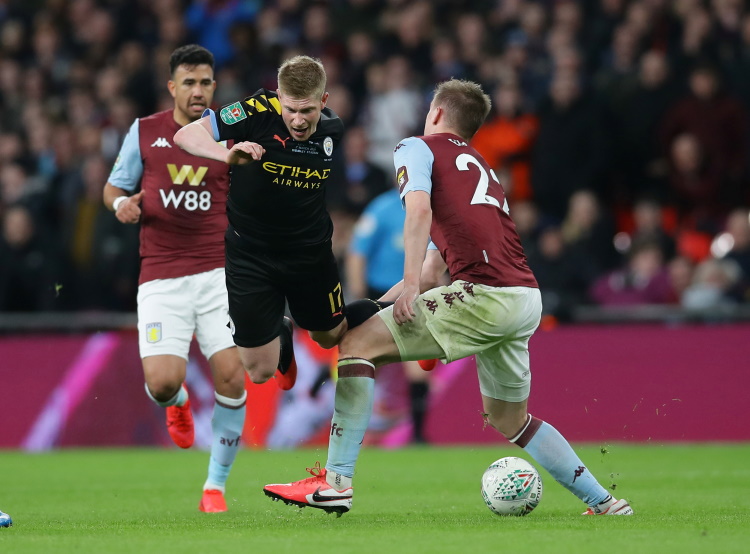 Manchester City midfielder Kevin De Bruyne could be facing a spell on the sidelines after he sat out Wednesday night’s FA Cup win over Sheffield Wednesday.

The 28-year-old did not travel to Hillsborough for Wednesday’s fifth-round tie, which City won 1-0 courtesy of a strike from Sergio Aguero in the 53rd minute of the game.

And now boss Pep Guardiola says he is unsure if De Bruyne will be fit for Sunday’s Premier League clash with Manchester United at Old Trafford.

When quizzed further about the injury, Guardiola said the Belgian landed awkwardly on his back and shoulder in the latter stages of Sunday’s Carabao Cup final victory over Aston Villa at Wembley.

It appears to be a shoulder injury, but the full extent of the damage and how long it will keep him out for, has yet to be revealed.

Speaking in his post-match press conference, Guardiola said: “Kevin had a problem here (points to shoulder). He was not fit. In the last game, the last minutes he fell down in a bad position and had a problem in his back. We don’t know how long (he will be out). Hopefully not much.”

Asked if he would be fit for the derby, Guardiola said: “I don’t know.”

Meanwhile, City were not at their best as they came up against a spirited Wednesday side, who made them work very hard for the win.

Guardiola said the most important thing was to make sure they were in the draw for the quarter-finals so it was mission accomplished in South Yorkshire.

“This was our fourth away game in a row and we have spent a lot of mental energy in the last few games,” he said. “The players were absolutely ready. We didn’t concede one shot on target and that means a lot.

“We are still alive. We corrected a few things in the second half and we could have scored much, much more.”

City now turn their focus to the Premier League and United, but it remains to be seen if De Bruyne will be playing.