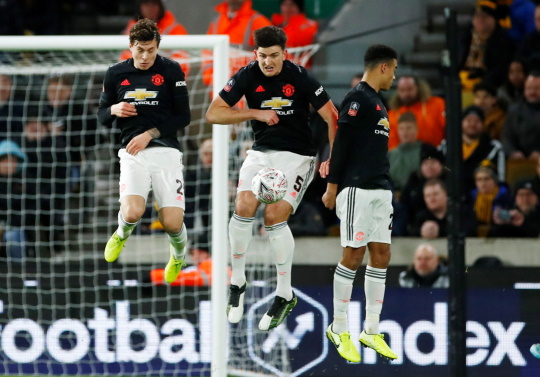 Harry Maguire believes his and Victor Lindelof's centre back partnership is going from strength-to-strength at the heart of Manchester United's backline.

Red Devils boss Ole Gunnar Solskjaer has predominately used the pair in the middle of defence this season, and the duo have helped the club move into eighth in the Premier League.

An injury to Eric Bailly at the start of the season pushed Lindelof into the starting XI, while former Blackburn Rovers ace Phil Jones has featured just twice in the Premier League.

Former Fulham stopper Chris Smalling was loaned to Roma in the summer and Solskjaer has been happy to put his faith in Lindelof and Maguire for the last six months.

United’s squad is currently away in Spain for a warm-weather training camp due to the winter break, and Maguire insists they have had the time while in Marbella to be able to work on other aspects of their game.

The England international says the club have conceded too many goals from set-pieces this season, but he believes he and former Benfica centre-back Lindelof can iron out any issues.

He told the club’s official website: “It’s been brilliant [playing with Victor]. We’ve had a good season up to now together. When you form partnerships, it takes time. I’m learning his game, and he’s learning mine, and I think we’re getting better.

“We’re keeping a lot more clean sheets than we were at the start of the season and we’ve never really been a team which has conceded a lot of chances. We’ve been poor from set-plays with our defending, and we’ve had a couple of great goals scored against us from outside the box.”

United’s squad will fly back to the UK later this week, as they prepare to face Chelsea at Stamford Bridge on Monday night, with striker January arrival Odion Ighalo set to be part of the squad for the first time.