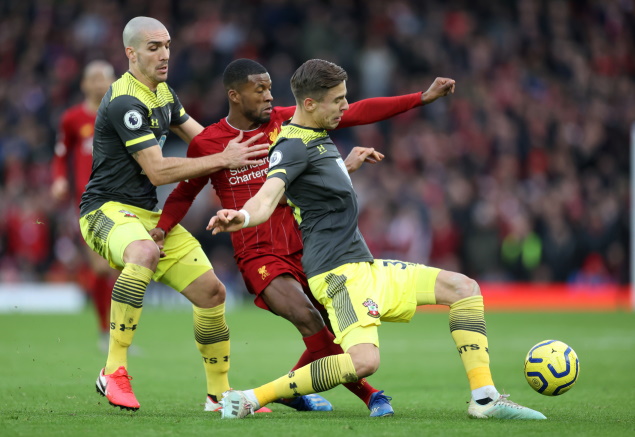 Southampton midfielder Oriol Romeu says he was never interested in leaving the club to return to Spain as he tries to fight for a first-team spot.

The 28-year-old has dropped down the pecking order in the last few months and La Liga outfit Celta Vigo tried to take advantage of that.

Celta are currently involved in a relegation fight of their own, but Southampton chief Ralph Hasenhuttl was always determined to keep hold of him.

The Austrian had a similar stance over striker Che Adams, with Leeds United desperate to sign him on loan until the end of the season.

Hasenhuttl did allow right-back Cedric Soares to move to Arsenal but Romeu says he has never given up hope of forcing his way back into the fold.

His appearance at Liverpool was his first since defeat to Everton in November, but Romeu says he will do all he can to dislodge James Ward-Prowse or Pierre-Emile Hojbjerg.

He told the Daily Echo: “There were rumours, but that was just talk. The club always told me that they want me here and I am more than happy to be here. I want to be competing for a spot in the team because I’m ready to go.

“We have some good moments to come until the end of the season because the team is doing very well. The team has a good dynamic, and that’s something you want to be part of. You always want to be involved.”

Ward-Prowse played as a right-back during the 4-0 defeat to the Reds, but he is set to move back into the middle when Kyle Walker-Peters is ready for action following his loan move from Tottenham.

Hasenhuttl now has plenty of options to consider all over the pitch and he will be confident his team can push into the top 10 come the end of the season.

The Saints are level with 10th-placed Arsenal but their attention for now is on the FA Cup as they prepare to travel to north London to face Tottenham on Wednesday night.