It’s time for Mourinho to show faith in Parrott 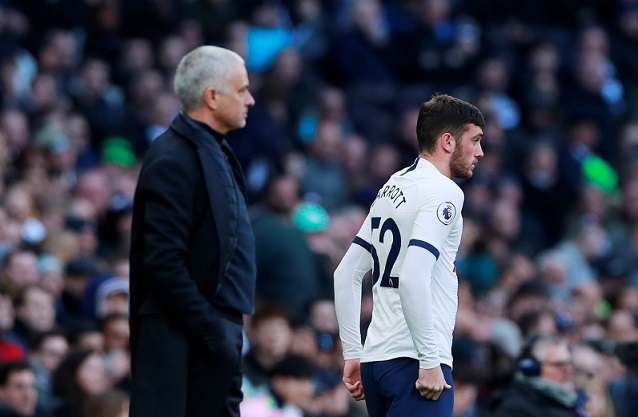 Striker-less Tottenham were beaten 3-2 by Wolves on Sunday afternoon and Jose Mourinho should now take a longer look at the talented forward on Spurs' books.

2020 could not have got off to a worse start for Tottenham – on New Year’s Day, their captain and talisman Harry Kane suffered a severe hamstring injury which could rule him out for the rest of the season and beyond.

Spurs without Kane are a different proposition – he knits things together so well for Tottenham that as well as being a lethal goalscorer, he can drop deep and almost play in an auxiliary number 10 role.

The only other senior player on their books who can play the lone forward role to a reasonably effective level is Son Heung-min.

However, injuries have befallen him as well with a fractured arm the latest issue for the South Korean.

He is expected to miss several weeks and Spurs have struggled to find a solution in reserve.

Dele Alli, Lucas Moura and new signing Steven Bergwijn (who has looked like a good piece of business in fairness) have all been deployed up front as “false nines” but have been ineffective.

Last week, Spurs were beaten 2-1 by Chelsea in a scoreline that flattered them immensely while they could not hold onto a lead on Sunday as Wolves won 3-2.

90 – Troy enters for the closing stages:

Tottenham are limping currently and their lack of options up front are the key factor.

It makes it even more baffling that Mourinho has one of the most talented young strikers on his books in Troy Parrott, yet he is only willing to give him cursory minutes off the bench.

The Dubliner has been heralded as a player for the future yet Mourinho only gave him two minutes to impress and help Spurs get back on level terms against Wolves.

He has decent pedigree already, despite his tender age – Parrott won his maiden Republic of Ireland cap in November after starting against New Zealand in a friendly match.

Currently, it is a situation of needs-must at Tottenham – they are desperate to get into the Champions League to justify the huge outlays both on Mourinho and the new stadium.

It is always a risk to play young, unproven players, but playing square pegs in round holes is never a great basis for success – so why not give Parrott a go?

The club clearly believe in their prospect having given the 18-year-old a new long-term contract last month.

He is a big physical presence, a trait which Mourinho likes, and has a very good goalscoring record albeit at youth level.

Now, it is time for Mourinho to show some faith, bite the bullet, and hand this prospect an opportunity to shine.

Otherwise, he could join a growing list of players, including Kevin de Bruyne and Mo Salah, who have slipped through his grasp.