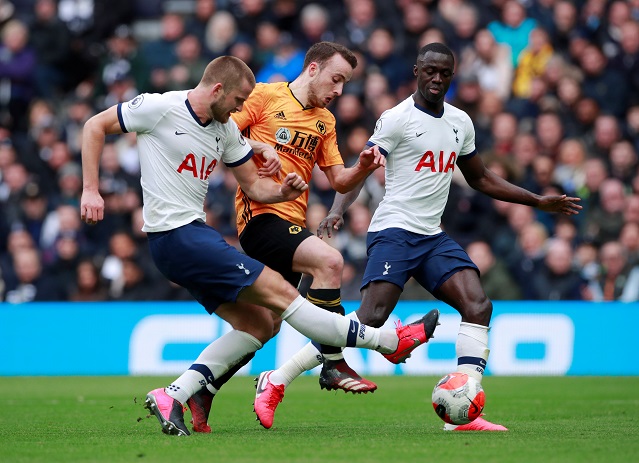 Tottenham's Eric Dier is convinced he plays his best football at centre-back and has spoken out after previously being “politically correct” on the issue.

Viewed by many as a utility player, the England international has played in an array of positions for Tottenham since first joining the club from Sporting Lisbon in 2014.

However, he was converted to a midfielder and hugely impressed in the 2015-16 season.

Dier’s form has taken a turn for the worse ever since however and his performances for both Spurs and England have come under scrutiny.

Recently Dier has seen his playing time increase since Jose Mourinho’s arrival as manager in November having lost his regular place under Pochettino.

With the north London club struggling for form, Mourinho decided to change things around for their game against Wolves on Sunday.

Dier played in the middle of a back three and although Spurs were beaten 3-2, he was singled out for praise by Mourinho.

Ben Davies 🗣"It's a beautiful name"

Now, the 26-year-old has revealed he hopes to play all his future football at centre-back.

“That’s where I see my future. I was happy to be able to play today, obviously very nice of the manager speaking that way about me,” Dier said, following the Wolves clash.

“It’s been something that isn’t new for me. The old manager knew where I stood for a long time about position and centre-back is where I see my future and I think where I can be the best I can be.”

Dier has made 232 appearances for Tottenham following his £4million transfer in August 2014.

The ex-Everton loanee earned an England call up in November 2015 and debuted against Spain in a 2-0 loss.

His most famous moment in an England shirt came in the 2018 World Cup after stepping up to score the winning penalty against Colombia in the last-16 shootout.