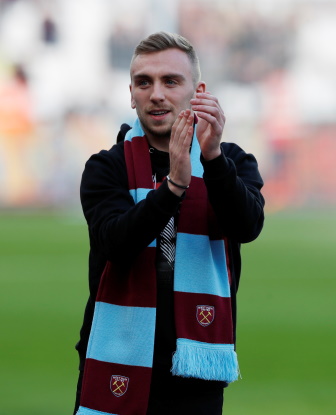 New West Ham winger Jarrod Bowen says his move to the club came at the right time in his career and he is confident the squad can help him improve.

The 23-year-old earned his £25million move to the top flight after some impressive performances in the Championship with Hull City.

Bowen moved to Hull as a teenager after making eight appearances for Hereford, and he went on to play 131 games for the Tigers, scoring 54 goals in the process.

He was linked with moves to Leeds United and Crystal Palace in January, but West Ham moved quickly to snap him up on transfer deadline day.

With his contract at Hull running down, they allowed Bowen to try his hand in the Premier League, but he joins with West Ham in a precarious position.

The Hammers are inside the relegation zone, and are two points away from safety with David Moyes’ men are struggling at the moment.

They were knocked out of the FA Cup by West Brom last month, while their last league win came on New Year’s Day when they beat Bournemouth 4-0.

Bowen has no doubts that West Ham is the right club for him and he believes he can play his part as the east London outfit try to climb the table.

He told Sky Sports: “I’m still young, and I know I’m not the complete package yet, so I thought I could learn off them. These are players who have played at the top for however many years, and that’s not a coincidence. There were a lot of positive factors.

“We are there at the moment, but you only have to look around the squad, the coaching staff and everyone to see that there is plenty of quality and Premier League experience. They know what it takes to stay in this division.”

Bowen could be handed his debut this weekend when West Ham travel to the Etihad Stadium to tackle reigning champions Manchester City in their final game before the mid-season break.