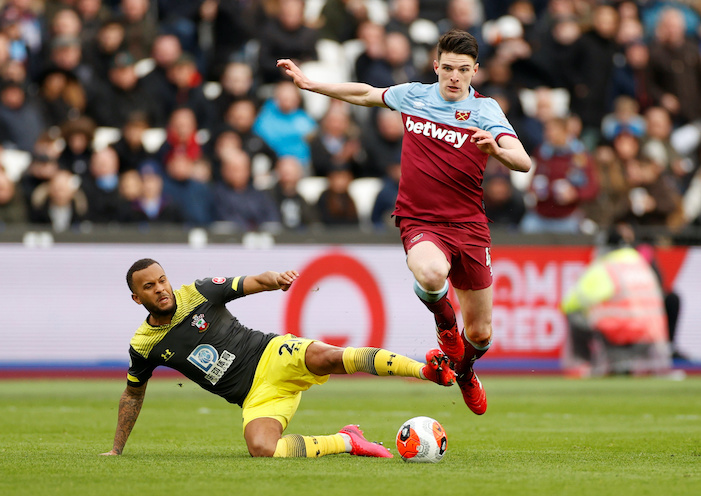 West Ham United defender Declan Rice says he is willing to move back into the heart of defence if it helps the team going forward.

The 21-year-old started his career at the back, and he was expected to play there after graduating from West Ham’s academy in 2015.

Rice, who has made seven appearances for England, has since been played further forward in a holding midfielder role.

Current boss David Moyes has also used him as a box-to-box midfielder on occasions this season, and he has always stood up to the test.

He has now made 101 appearances for the Hammers during a four-year spell, and the fan favourite is hoping to enjoy a long and successful career at the London Stadium.

Rice has also revealed he would love to captain the club one day when midfielder Mark Noble moves on, and he admits that a positional change is not out of the question if Moyes tries to change his tactics.

He told the club’s official website: “The good thing is I’m comfortable at centre-half and, if the manager asked me to play there, I’d have no problem at all and be confident playing back there.

“At the moment, I’m playing in midfield, everything’s around me, and I’m learning that position, but maybe in the future, I could see myself going back to centre-half, for sure, as I get stronger and a bit better on the ball.

“At the moment, I’m playing in midfield, so I’m keeping it open, but I’d never rule it out that maybe I could go back there one day.”

Rice and his Hammers team-mates remain at home as West Ham continue to send workouts for the players during the coronavirus pandemic.

Why we miss it ❤️
Why health and family come first right now ❤️ pic.twitter.com/DdArW6NgCn

Moyes’ men still need several wins to guarantee their safety, and they face a tough few weeks when the season resumes.