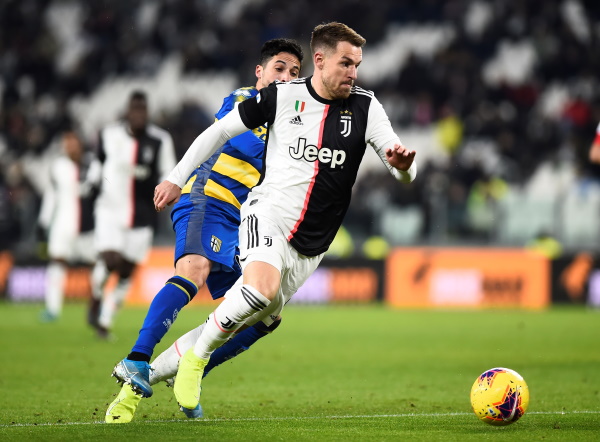 Aaron Ramsey’s future looks to be in serious doubt at Juventus – and clubs in England should be taking note.

The Welshman ended a decade-long association with Arsenal in the summer after departing on a free transfer following the failure to agree a new deal.

Juventus were the side to win the race for his signature and he joined up with his new team-mates in the summer.

Ramsey was initially injured when first moving to the Turin outfit and had to wait until September to make his debut.

That day came in their Champions League group-stage match against Atletico Madrid when he emerged from the bench in the second half of the 2-2 draw at the Metropolitano.

Three days later, the 29-year-old was selected by Maurizio Sarri to start against Hellas Verona at the Allianz Stadium and it proved to be a dream debut in Serie A.

His long-range effort got the Old Lady back on level terms in a match in which they triumphed in 2-1.

Ramsey would have been hoping to capitalise on that and establish himself as a regular in the Juventus line up but it hasn’t transpired as he would have liked.

Since that debut appearance, the Cardiff academy product has only played ten more times in the top flight and has been rotated in and out of the side by Sarri.

Fresh reports are indicating his future in Italy is in doubt with the former Chelsea boss not convinced by his abilities in the side.

Several clubs at home and abroad will be alerted by his apparent availability and Ramsey could undoubtedly do a fine job for any of the big hitters in the Premier League.

Manchester City are planning on saying goodbye to David Silva at the end of the season and while Ramsey is not in the same class, he would help bring extra dynamism and goals to a midfield currently lacking in spark.

Chelsea may also feel the same way – Jorginho and Mateo Kovacic are neat and tidy technical footballers but neither provide he goal threat Ramsey has.

Even Manchester United shouldn’t be ruled out of the equation to sign him – Paul Pogba is not only under a cloud of constant speculation; he is looking increasingly injury prone.

Again, United are a team that need to freshen up in midfield with the likes of Juan Mata and Andreas Pereira not cutting the mustard and Ramsey would help add goals.

Even a return to Arsenal shouldn’t be totally ruled out.

Ramsey may have left on a free transfer, but it certainly didn’t seem like an acrimonious departure and the chance for Mikel Arteta to link up with an old team mate who regularly scored important goals might seem like a tempting prospect.

Clearly, it doesn’t look like Ramsey will be a first-choice at Juventus as long as Sarri remains manager (a manager who, from his time at Chelsea, does have his favoured players).

Hence, he could become available in the summer and be the subject of a mass bidding war.